The Story Behind “A Scrappy Fourth of July” (In Pursuit of Dead Georgians, 29)

Posted on July 1, 2018 by georgelamplugh

[Note:  Last time, I regaled you with “Confessions of a Historical Pack Rat,” a light-hearted look at where I’ve gotten some of the material for posts at “Retired But Not Shy” (hereafter RBNS) over its first eight years.  As it turns out, with July 4th only a few days away, I now have the chance to retell that story, focusing on the “history” of a single post that has already appeared here three times, in different forms, and is appropriate for the coming national holiday.] 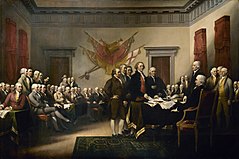 Atlanta’s Finest Prep School (AFPS) is a “unit school,” which means, among other things, that, at least in theory, its curriculum across the K-12 educational spectrum should be synchronized over the course of those thirteen years.  The question always is, what does that mean to the classroom teacher?  This is something that each department head wrestles with, as I did during eight years as Chair of the History Department.  Admittedly, I did not do as much with the concept as I might have during my tenure as Chair.

As the 2009-2010 school year opened, my last at AFPS, I had been “back in the trenches” (i.e., a fulltime classroom teacher) for more than a decade.  In addition, I was the editor of the department’s newsletter.  As a sort of farewell gift (?) to my History colleagues, I asked them to share, through the newsletter, how they taught their students about the Declaration of Independence.

I introduced what I called the “Declaration Project” during our pre-school department meetings.  The plan was for each division (elementary, junior high, high school) to contribute an article on the topic to the newsletter, for the January, March, and May 2010 issues, respectively.  So that my colleagues would have an idea of what I expected of them, I wrote an article in the September 2009 issue, “The Declaration Project: Introduction,”  which, as it turned out, would, a couple of years later, be the genesis for a series of posts at RBNS on July the 4th celebrations in Antebellum Georgia.

By late 2011,  I’d been retired for eighteen months; since June 2010 I’d been the blog-meister at RBNS; and I need something to write about for December.  Pondering alternatives, I seized upon that September 2009 newsletter article–perhaps, if I expanded  it, adding a number of specific examples of political activities on the 4th of July in Antebellum Georgia drawn from both my dissertation research and my current project, I might produce an interesting post, at least to readers who, like myself, were “In Pursuit of Dead Georgians.”  The result, posted on December 1, 2011, “A ‘Fourth Dimension’ in Georgia Politics,” both had a vague title and was published at the wrong time of the year, but, hey, it took care of December 2011!

A few years later, as I was thinking once again about what to put up at RBNS in July, I returned to that earlier post.  “Why not make a few revisions, and post it in the chronologically appropriate month?” I wondered.  So, on July 1, 2015, a slightly different version of that 2011 essay debuted as “A Scrappy Fourth of July.”

Two years later, I revived that 4th of July post, thinking that, like my treatment of Dr. Martin Luther King, Jr., posting it might become an annual event.  The result:  “A Happy Fourth, from Antebellum Georgia!” appeared on July 3, 2017.

All of which–son of a gun!–brings us to late June, 2018.  I had been working on a different post for July 1, but it occurred to me last night that a 4th of July post would perhaps be  more appropriate.  So, here it is, for those who might have missed it, my homage to Antebellum Georgians, their shifting views of the Declaration of Independence, and what that might mean to us today:

I retired in 2010 after nearly four decades of teaching History at the "prep school" level with a PhD. My new "job" was to finish the book manuscript I'd been working on, in summers only, since 1996. As things turned out, not only did I complete that book, but I also put together a collection of my essays--published and unpublished--on Georgia history. Both volumes were published in the summer of 2015. I continue to work on other writing projects, including a collection of essays on the Blues and, of course, my blog.
View all posts by georgelamplugh →
This entry was posted in 4th of July, American "republicanism", American History, American Revolution, Education, Georgia History, Historical Reflection, History, History Curriculum, History Teaching, Popular Culture, Research, Retirement, Southern History, Teaching, Uncategorized and tagged American History, American History and Culture, American Popular Culture, education, Georgia and the American Revolution, Georgia History, Historical Reflection, History Curriculum, History Teaching, Retirement, Southern History, Teaching History. Bookmark the permalink.