Posted on January 13, 2018 by georgelamplugh

[NOTE:  I have described in several earlier posts the long and winding curricular road that eventually led me to teach a course,  the “History of the Modern American Civil Rights Movement,” for a few years at an Atlanta “prep school.”  (See here, here, and here.)  Recently, I came across another milestone on this journey to the Civil Rights course, a brief talk I gave to help commemorate the life and legacy of The Rev. Dr. Martin Luther King, Jr., during an assembly at my school on January 16, 1987.

The head of the History department had asked me a couple of weeks earlier to prepare a 5-10 minute biographical sketch to introduce a panel discussion on Dr. King and his historical significance. To me, the most important part of the talk was not the biographical information.  Rather, I was more concerned with the final section, where I shifted from a rather dry, objective overview to a more personal take on the man and what he meant to us as a nation.  That section appears below, lightly revised.] 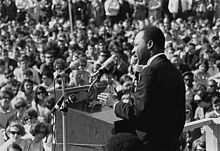 Martin Luther King, Jr., was the most eloquent and best-known voice of the civil rights movement between 1956, the year of the Montgomery bus boycott, and his assassination twelve years later.  His dedication to the philosophy of non-violent resistance against segregation and discrimination; his powerful, moving speeches; and the sympathetic eye of television news made him the most visible symbol for the strivings of his people.  To many of us growing up in the 1950s and 1960s, King was the Movement.  That, of course, was a vast oversimplification, unfair to other talented leaders, and especially to those anonymous “foot soldiers” they led.

Even if Dr. King symbolized the civil rights movement to a child of television like me, there was much more to him than that.  His concern for equal rights was not abstract or intellectual.  His commitment was deeply spiritual:  his grounding in the Christian faith, combined with his natural gifts, created a leader who was charismatic, compassionate, and self-sacrificing.  Nowhere is this more evident than in a talk he gave to 2000 people tightly crammed into a Memphis church on a rainy spring evening.  I would like to share some of what he said on that occasion with you this morning.

Dr. King was tired and his nerves were frazzled because of a bomb threat that had delayed his flight earlier that day.  He didn’t want to speak that evening, but his aides convinced him that he should.  At the beginning of the talk, he reviewed his career and spoke of the challenges that lay ahead for the civil rights movement.  Then he turned to various threats against his life:

I don’t know what will happen now.  We’ve got some difficult days ahead.  But it really doesn’t matter with me now.  Because I’ve been to the mountaintop.  Like anybody I would like to live a long life.  Longevity has its place.  But I’m not concerned about that now.  I just want to do God’s will.  And He’s allowed me to go up to the mountain.  I’ve looked over.  And I’ve seen the Promised Land.  And I may not get there with you.  But I want you to know tonight that we as a people will get to the Promised Land.  So I’m happy tonight.  I’m not worried about anything.  I’m not fearing any man.  Mine eyes have seen the glory of the coming of the Lord. . . . With this faith, we will be able to achieve this new day, when all of God’s children—black men and white men, Jews and Gentiles, Protestants and Catholics—will be able to join hands and sing with the Negroes in the spiritual of old, “Free at last!  Free at last!  Thank God almighty we are free at last.”  (Stephen B. Oates, Let the Trumpet Sound, p.486)

Martin Luther King, Jr., delivered this message on the evening of April 3, 1968.  Less than twenty-four hours later, he was dead.  The words of the Negro spiritual quoted by Dr. King are carved on his tomb. 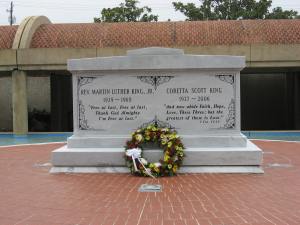 There were black leaders more militant than King, shrewder, better organizers.  But none could rouse listeners—whether black or white—as he did:  to indignation against injustice; to marches and demonstrations at the risk of facing policemen’s clubs, tear gas, dogs, and cattle prods; to faith in the inevitable triumph of love over hate, brotherhood over persecution.  Martin Luther King, Jr., is, to me, one of the truly heroic figures of the twentieth century.

For a subsequent evaluation of King’s significance, the product of additional decades in the classroom, what I trust is a broader understanding of the history of the civil rights movement, and several years teaching a course on that topic, I invite you to read this post, from 2015.

I retired in 2010 after nearly four decades of teaching History at the "prep school" level with a PhD. My new "job" was to finish the book manuscript I'd been working on, in summers only, since 1996. As things turned out, not only did I complete that book, but I also put together a collection of my essays--published and unpublished--on Georgia history. Both volumes were published in the summer of 2015. I continue to work on other writing projects, including a collection of essays on the Blues and, of course, my blog.
View all posts by georgelamplugh →
This entry was posted in Uncategorized. Bookmark the permalink.