Posted on September 1, 2020 by georgelamplugh

Loren Baritz, Backfire: A History of How American Culture Led Us into Vietnam and Made Us Fight the Way We Did (1985); and

[Note:  The “page” devoted to posts on “The Vietnam Era” at this blog charts a defining period in my life.  Four posts are devoted to “Growing Up with Vietnam” [Part I, Part II, Part III, Part IV], a lecture I wrote to present the history of the war to my students, from a personal perspective. Two posts originated as editorials during my time as editor of the my school’s History Department Newsletter. [here and here]  Another dealt with “Teaching the Vietnam War as History,” a talk offered to a group of local history teachers at a conference.   In 2015, I combined a book review with a concise account of “My Vietnam War and Welcome to it.”

Before I could write “Growing Up with Vietnam,” I delved into the history of our involvement in Southeast Asia after World War II.  A very helpful volume I encountered during those early years at AFPS was Loren Baritz’s Backfire: A History of How American Culture Led Us into Vietnam and Made Us Fight the Way We Did (1985).  A generation later, after I’d been retired for five years, I read another scholarly effort to explain our involvement in Vietnam and what it wrought, Christian Appy’s American Reckoning:  The Vietnam War and Our National Identity (2015).

In this post and the next, I want to revisit our Vietnam adventure and its consequences, in light of both Baritz’s 1985 volume and Appy’s take on the same subject a generation later.] 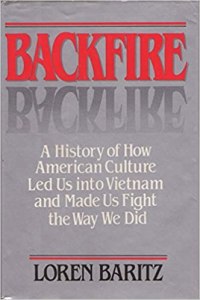 In Backfire, Loren Baritz asserts that we never understood Vietnam, or even tried to.  He is especially harsh on the influence of our continuing belief in the myth of “American exceptionalism” that he traces to Governor John Winthrop and the colony of Massachusetts Bay: that the Puritan colony was a “city upon a hill” which the world would watch to see how a group of religious people organized a society governed by the ordinances of God.
* * * * *
Baritz pursues the idea that the United States was a special, God-given, and God-protected nation into the twentieth century, including the beliefs of President Woodrow Wilson, whose idealism (e.g., that America’s role in World War I was to “make the world safe for democracy”) met bitter defeat when Congress refused to support American membership in the new League of Nations at war’s end.  Baritz argues that this notion of “American exceptionalism” was also held by President John F. Kennedy and his chief advisors five decades later.  American altruism was absolute in the 1960s, Baritz contends, and we were convinced we could prevail militarily in a “limited war” anywhere in the world, buttressed by our superior technology, which supplied the tools; and our federal bureaucracy, both civilian and military, which provided the procedures and trained and led the men and women who used those tools to attain our desired aims.

To Baritz, our involvement in Vietnam was a product of the Cold War.  He creates a metaphorical “Chain to Vietnam,” comprising ten “links” between the issuance of the Truman Doctrine in March 1947 and the situation in Vietnam in September 1960, near the end of President Dwight Eisenhower’s second term, when we were paying 70% of the budget of the newly-created “nation” of South Vietnam.  One underlying premise in the forging of this “chain” was the Truman Administration’s acceptance of diplomat George Kennan’s policy of “containment,” the theory that the Soviet Union was an expansionist power, but that, if the West resisted, the USSR would collapse, the victim of Soviet Communism’s internal contradictions.  Containment seemed to work in Europe immediately after World War II, but, by the 1950s, the doctrine was fading, because the Soviet Union, frustrated by American efforts at “containment,” began to work through proxies, including the Communist regime under Ho Chi Minh in North Vietnam.

To Baritz, the myth of  Governor Winthrop’s description of  the “city upon a hill” fitted snugly with “containment” and helped to impel America’s God-given mission to build democracy around the world. Fortunately for that “city upon a hill,” President Eisenhower’s Secretary of State, John Foster Dulles, was “Woodrow Wilson’s most direct and natural heir.” (78)  (And, though Baritz could not have known this, Dulles’ sunny take on Wilson’s outlook on world affairs would live on, into the early twenty-first century, when President George W. Bush and his administration viewed the prospect of American intervention in Iraq in the aftermath of 9-11 as a sort of “cake-walk,” with a Texas twang.) 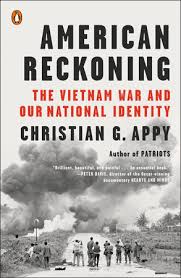 In Christian Appy’s American Reckoning, the “reckoning” was produced by false pretexts used to justify our intervention in Vietnam; the indiscriminate brutality of our warfare; the stubborn refusal of elected leaders to withdraw from Southeast Asia, despite public opposition; and the military’s failure to achieve its objectives.  Appy’s thesis is that our involvement in Vietnam “shattered the central tenet of American national identity—the broad faith that the United States is a unique force for good in the world, superior not only in its military and economic power, but in the quality of its government and institutions, the character and morality of its people, and its way of life.  A common term for this belief is ‘American exceptionalism.’” (xi-xii)  Thus, Appy agrees with Loren Baritz that the idea of “American exceptionalism” was at the heart of our involvement in Southeast Asia, a part of our cultural DNA.

Although Professor Appy, like Baritz, reviews the Cold War background of our involvement in Vietnam, he basically reduces it to the perceived need for the United States to “save” Asia, and, because we were the United States, he argues, we believed we would succeed.  (On the other hand, race relations in the U.S. at the time did not reveal a lot of love for people of color.)

To Appy, the key to our involvement in Vietnam was President Eisenhower’s belief in the “domino theory.”  “For U.S policymakers, supporting capitalism and building anti-Communist alliances were indistinguishable goals; they were ‘two halves of the same walnut,’ to use [President] Harry Truman’s phrase.” (94)  But, Appy argues, the key was to cloak this economically-oriented rhetoric in language calling “for global freedom and democracy, not global capitalism.” (95)  (By the 1990s, for example, the United States had established diplomatic relations with Vietnam, which, though Communist, “was now open for business.” [114])

Baritz and Appy agree that the war in Vietnam was fought “by the numbers,” as the administrations of Presidents Lyndon Johnson and Richard Nixon were determined to stave off the angry right wing of American politics by claiming—and supporting with all sorts of statistical information, no matter how wrong or misleading—the success of “superior” American forces against the “inferior” armies of North Vietnam, from 1965 to 1968.  Yet, our general at the time, William Westmoreland, evidently understood the importance of winning battles against the entrenched American military and governmental bureaucracies better than he did the armies of North Vietnam and the Vietcong.

When, in 1968, the North Vietnamese and their South Vietnamese allies launched the Tet Offensive, the result was an American “victory,” but one from which we never recovered.  The “credibility gap” between what a President said and what he actually did came home to roost, with a vengeance.  President Johnson was so stricken by Tet that he declined to run for re-election in 1968.

Both Loren Baritz and Christian Appy criticize the operation of the draft during the Vietnam War.  Baritz, in a treatment I drew on for my “Growing Up with Vietnam” lecture, points out that, of 27 million Americans eligible for the draft, 2,215,000 were drafted; 8.7 million enlisted, some to avoid the draft; 500,000 evaded or resisted the draft; and 16 million had deferments, exemptions, or disqualifications. (Baritz, 287)  By Appy’s reckoning, poor and working-class Americans formed the bulk of the American war effort:  “About 60 percent of the Vietnam generation’s men were able to avoid military service, most of them simply by taking advantage of the rules created by the draft.” (Appy, 134-136)

There’s a sense in which both historians play fast and loose with that figure of sixteen million Americans who had deferments, exemptions, and qualifications.  A sizable number of those individuals were granted deferments for college, but with the obligation to enter the military once college, or in some cases graduate school (e.g., law, medical,  or dental school), had been completed.  True, some of those students abused that deferment provision (with prominent names among them); but others, including me, played by the rules and did our duty.  [In my case, two years on active service (U.S. Army Quartermaster Corps, 1966-1968), followed, once I entered graduate school, by two additional years in the active Reserve, most of it in a Quartermaster unit in Rome, GA, north of Atlanta.]

An interesting difference between the coverage of the “war at home” in the two books is that Baritz, writing in the mid-1980s, scatters his references to the antiwar movement throughout the text.  Appy, on the other hand, delivers a solid chapter on the domestic responses to the war: the antiwar demonstrations, of course; but also the role of the civil rights movement—and its face and voice in the 1960s, The Rev. Dr. Martin Luther King, Jr.—in trying to shape popular opinion about the war.  Appy also examines the efforts of President Richard Nixon to use the idea of a “Silent Majority,” whether hardhats in New York City or Ohio National Guardsmen at Kent State University in Ohio (1970), to build a pro-war constituency.

With thirty more years of hindsight than Baritz to draw on, Christian Appy also has a better appreciation of the significance of technological changes in television coverage of the war, which showed Americans on the home front, who viewed bloody small unit engagements each night over dinner, the nature of modern warfare, and, thus, helped turn them against it.  While Baritz certainly did not neglect efforts by GIs in Vietnam to resist the war, Appy seems more attuned to it, as well as more aware of the work of the antiwar “Vietnam Veterans Against the War.”  Finally, Appy notes that even prominent historian Henry Steele Commager, “who had come to national prominence in the 1950s as a prolific champion of American exceptionalism,” argued in a 1972 article that Vietnam was “not only a war we cannot win, it is a war we must lose if we are to survive morally.” (217)

Next:  Short and long-term consequences of the Vietnam War, according to Baritz and Appy.

I retired in 2010 after nearly four decades of teaching History at the "prep school" level with a PhD. My new "job" was to finish the book manuscript I'd been working on, in summers only, since 1996. As things turned out, not only did I complete that book, but I also put together a collection of my essays--published and unpublished--on Georgia history. Both volumes were published in the summer of 2015. I continue to work on other writing projects, including a collection of essays on the Blues and, of course, my blog.
View all posts by georgelamplugh →
This entry was posted in American History, Books, Education, Historical Reflection, History, History Curriculum, History Teaching, Prep School, Research, Retirement, Teaching, Vietnam War, WP Long Read. Bookmark the permalink.

4 Responses to The Vietnam War and American Culture(s), Part 1