Posted on March 1, 2020 by georgelamplugh

[Note: The events of the summer of 1964 [see here] put an end to Betts and Ben Lamplugh’s marriage and shattered their family: Betts’ bus trip to Newark; Ben’s angry phone call later that day; and Betts’ refusal either to talk to him or to return home forced their children to choose sides. For previous episodes, go here, here, here, here, and here.]

Judy had just graduated from high school and was looking forward to finding a job and beginning life on her own, but she agreed to remain with Ben and Rick, so that “Rick could have a life,” as she later said. She soon tired of her duties as a sort of live-in maid, tending to the needs of her father and her brother.  She felt trapped.  Even though Ben had bought Judy a used car, she had not gotten a driver’s license before she decided to head to Newark to join Betts. When Judy told Ben she was leaving, he warned her that, if she went, he “wouldn’t have a daughter anymore.” She moved north anyway, and Rick inherited that used car.

When his parents’ marriage imploded, Rick was about to begin his junior year in high school, and he didn’t want to leave Baltimore for a different school. Instead, he opted to remain with Ben; and, once Judy departed for Newark, Rick assumed the task of “looking after” his dad. As he has recorded in his book, The Wilds of Aging, “Life with Father” was no walk in the park.

Betts had formerly taken care of paying the family’s bills; Ben’s responsibility was to bring money home to cover them. Without Betts, Ben didn’t seem to know—or care—what to do. His drinking became more of a problem; bills went unpaid; and bill collectors came calling. Rick occasionally found himself on the road at night trying to locate Ben—and bring him home from a bar. A few months after graduating from high school in 1966, Rick enlisted in the U.S. Army. Once on active duty, he cut himself off from his parents and his siblings.

Betts and Ben had borrowed money to cover Rus’s college expenses, which worked until just before his senior year. One of the bills Ben had neglected to pay, following the marital break-up and subsequent divorce, was that college loan; Ben eventually declared bankruptcy. Faced with the prospect of not graduating from college, Rus cobbled together funds for his senior year from a summer job, ROTC stipend, salary as a resident assistant in a dormitory, and a loan from his girlfriend Faith’s parents.

Ben remained in Baltimore until 1967, when he moved back to Delaware and once again began working for his older brother, at Bill’s Wilmington gas station. By that time, Ben essentially had “lost” his wife and children, declared bankruptcy, and seen his dependence on alcohol increase, so he probably welcomed another chance to work for Bill, while trying to figure out what to do next.

One thing Ben didn’t do was maintain much contact with his children.  He missed big events.  Judy married–eloped–in January 1967, and neither Betts nor Ben attended the ceremony.  Six months later, Rus married Faith Ferguson in the chapel at the Army post where he was stationed. Once again, Ben was absent, perhaps because he knew that both Betts and her mother would attend the ceremony.  Yet, when Rick got married in August 1973, Ben, Betts, and Judy were in attendance.

With Rus and Rick in the Army, there was little they could do, even if they’d wanted to, to maintain much of a connection with Ben.  Judy lived a few miles from him, and she  kept in touch for a while after his return to Delaware, but that did not last. Relations between Ben and his daughter became so strained that they stopped speaking to each other.

Once Rick and Rus completed their military service, they settled into lives far from Ben (and Betts), Rick in Oregon and Rus in Georgia.  Neither made much effort to maintain contact with his father, with distance an obvious factor.  As each son started a family, a trip to see Ben (or, for that matter, Betts) became a major undertaking.

In 1969, Judy learned that Ben had a red-headed daughter, thanks to a woman he’d met when he moved back to Delaware.  Unfortunately, the little girl died before the age of two.

Ben had always been proud of his red hair. He hoped to have at least one red-headed child, which was why he and Betts gave their first son the middle name Russell, so that they could call him “Rusty” when his red hair blossomed. But that dream didn’t work out: Rus had black hair, and Judy and Rick had brown.  However, Ben did wind up with a red-headed grandson, Rus’s older son, Jim. 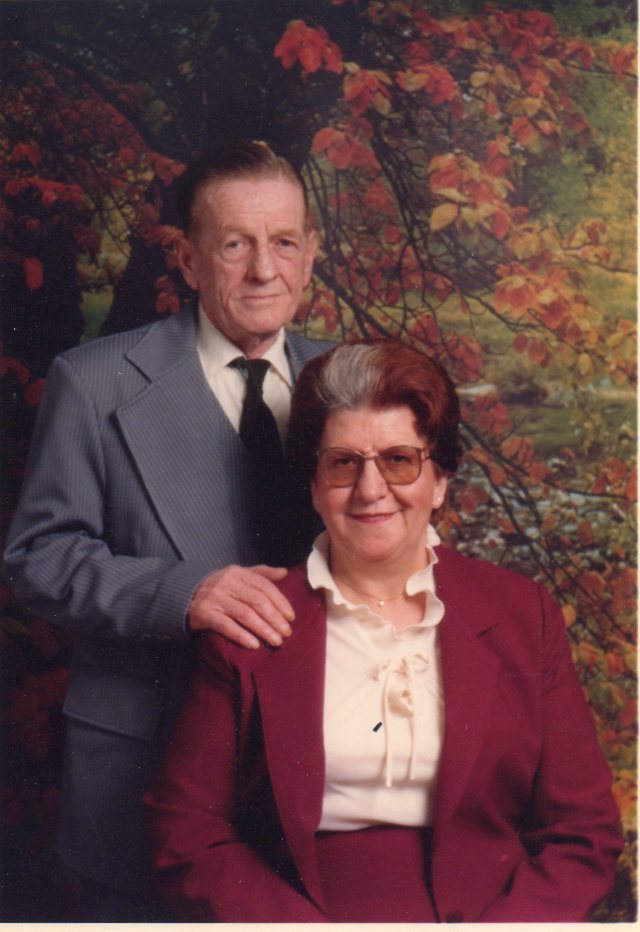 About 1970, Ben’s new life in Delaware changed when he met June, who owned a liquor store in Wilmington.  June hoped to enlist Ben to help her manage the store, but there was a problem, Ben fondness for alcohol.  June and Ben decided that, if he were to join her in running the bottle shop, he must stop drinking. And, apparently, he did. Although they never married, Ben and June were together until Ben’s death.

The picture above, though not a wedding photograph, presents an interesting contrast to Ben and Betts’ wedding picture from 1943.  [go here]  Each portrait captures Ben with a strong woman.  In the earlier one, the young Ben seems uncertain of the future, but eager for it to unfold with Betts.  In the photo nearly four decades later, on the other hand, Ben, well-dressed but world-weary, stands behind June, content to follow her into the future. 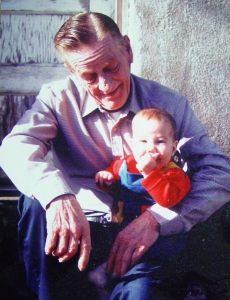 Ben and June raised Chihuahuas.  My sons remember that one of their dogs was blind and, wrapped in a blanket, would lie shivering on Ben’s lap. The boys also recall the roof garden atop Ben and June’s Wilmington apartment, the large German shepherd on duty at the liquor store, and Christmas novelty booze packages stored in the basement, which, Ben said, he used to remind himself of the alcohol addiction he was trying to escape.

Ben had always been a heavy smoker, and, by the late 1970s, he had been diagnosed with emphysema.  By 1984, he was on oxygen almost 24 hours a day, had constant trouble getting his breath, and seemed very depressed.  Yet, according to both Judy and Rick, Ben still wanted to smoke; his willingness to sneak out of his room for a cigarette cost him his place at one medical facility.

In August 1984, I visited Ben in a convalescent home. His once carrot-red hair had been cut short and turned dark; his face was craggy, his breathing labored, despite the oxygen tank; his ankles were swollen. Because he’d had a close call several months earlier at home, Ben was afraid of further problems with his breathing and wanted to do as little physical activity as possible. His attitude distressed June, who hoped he could continue to live at home with her, or, if he needed to be elsewhere, reside in a facility where he could be more active.

In July 1985, I saw Ben in a Wilmington nursing home. The contrast between Ben and June was stark. They were about the same age, but June was healthy and vigorous, while Ben was gray, tethered to an oxygen tank, and afraid to do much of anything.  He seemed tired, dispirited, uninterested in what went on around him.

The following summer, I visited Ben for what proved to be the last time. He looked dreadful: unkempt, gray, shaky; his feet were swollen and black, his ability to talk hampered by heavy dependence on his oxygen tank. Ben believed that the authorities at the nursing home were forcing him to remain immobile, because they refused to allow him to carry his oxygen tank with him into the halls. The unspoken corollary was that, if he were moved elsewhere, he might be permitted to walk about more, yet his prolonged immobility had irreparably weakened his lungs and his legs; even minimal physical effort seemed beyond him.

Judy, Rick, and I were mystified at how Ben and June were able to afford the cost of the  care he was receiving. Whatever the source of the money (surely some of it was from the government), it eventually ran out, and Ben’s last hope was to move from a private nursing home to the state hospital. To raise the necessary funds, Delaware authorities turned to his children. We began planning to assume financial responsibility for the cost of his care at the start of 1987, but, in the end, we did not have to do so.

June visited Ben on Christmas Day, 1986, to take him his presents. He seemed glad to see her and was generally cheerful. The following morning, however, he experienced problems at the nursing home. He was taken to the hospital and put into the ICU, where he died at about 11:30 A.M. He was sixty-five.

Ben had asked to be cremated.  His brother Bill, faithful to the end, inurned Ben’s ashes at a local cemetery, in one of the family plots he and his wife Maxine had bought several years earlier.

Betts had mixed feelings about Ben’s death:  she had loved him, once; married him; borne him three children; lived with him for over twenty years before leaving in 1964.  She explained that, like her own father, Ben had been raised in a “mixed up” home and, thus, never was able to show much emotion.  In other words, Betts was, in her own way, defending Ben.

Betts called me on the morning of December 26 to inform me of Ben’s death.  I was on my way out the door for my daily run.  I took the phone, heard what Betts had to say, thanked her for calling, and then set out to jog with my older son.  I didn’t say much about what I’d just learned, nor did I cry upon hearing the news.  I have not cried yet.  Ben was my father, and I honor that; but to this day I still struggle with his legacy.

Judy, Rick, and I purchased this plaque for Ben’s grave:

I retired in 2010 after nearly four decades of teaching History at the "prep school" level with a PhD. My new "job" was to finish the book manuscript I'd been working on, in summers only, since 1996. As things turned out, not only did I complete that book, but I also put together a collection of my essays--published and unpublished--on Georgia history. Both volumes were published in the summer of 2015. I continue to work on other writing projects, including a collection of essays on the Blues and, of course, my blog.
View all posts by georgelamplugh →
This entry was posted in American History, Delaware, Education, family history, genealogy, Historical Reflection, History, memoir, Newark (Del.) High School Class of 1962, Popular Culture, Research, Retirement, Rick Lamplugh, Teaching, Uncategorized and tagged American History and Culture, American Popular Culture, education, family history, Historical Reflection, history, History Teaching, Newark (Delaware), Retirement, Teaching, Teaching History. Bookmark the permalink.