Posted on June 1, 2017 by georgelamplugh

[This is the second and concluding post about the trip the Willowy Bride (AKA, the WB) and I took along the Delta portion of the Mississippi Blues Trail in May 2013.  For Part 1, go here.]

Today was the most “Blue(s) Highways Vacation Trip” we’ve had:  it was leisurely and we left Route 61 several times in pursuit of scenic “attractions.”  (Not something I’m famous for on vacations, by the way.)  Still, we put less than 120 miles on the odometer, winding up in Tunica, a little over 60 miles from Cleveland, where we had spent last night.

We left our motel about 8:30 a.m., which meant that we had about 1 1/2 hours before the Delta Blues Museum in Clarksdale, our planned first stop, opened for the day.  Since Clarksdale is probably only 30 miles or so from Cleveland, we were in no hurry.  Consequently, we made a few detours and stops en route.

One place I wanted to drive through was the historically all-Black community of Mound Bayou, founded after the Civil War.  I figured that, given its unique history, there’d be a museum or tourist information center, but there was not much to see, because a fire had destroyed much of the downtown in the 1940s. (My thirst for information on Mound Bayou would be slaked the next day at the Tunica River Park Museum–see below.)  We also followed signs that took us off Route 61 in pursuit of Mississippi Blues Trail markers.  One, in Wintonville, was on the former site of the “Harlem Blues Club.”  Another, in the nearby town of Shelby, commemorated Blues pianist Henry Townsend.

We arrived in Clarksdale shortly after the Delta Blues Museum opened and spent a couple of hours browsing through it.  The museum has continued to evolve since our first, abortive trip there several years ago, when the gift shop was open but the museum itself was closed for the installation of a new exhibit.  Like the B.B. King Museum, this one has added an extension to its original home, an old train depot.  The plan is to add a series of exhibits tracing the history of the Blues from Africa to the present.

Unlike the King Museum’s addition, this one, though completed, is fairly empty as the museum conducts a fund-raising campaign.  Still, the end section of the addition is temporarily the home to a Muddy Waters exhibit that features one of Muddy’s Ford sedans and–drum roll, please!–the restored cabin where he was born on the Stovall Plantation. There also was a life-size model of Muddy, seated and playing his guitar, in that same area. As my church friend had said, the Delta Blues Museum is not nearly as interactive as the B.B. King Museum, but it does feature a few video clips, plus lots of striking photo exhibits, stage costumes, donated instruments, posters, and biographical information on a ton of Blues musicians, both famous and otherwise.

After our visit to the Delta Blues Museum, we strolled through parts of downtown Clarksdale, and we discovered the “Rock ‘n’ Roll and Blues Heritage Museum,” based on the holdings of a former Dutch banker who is so enamored of the Blues that he even released an album of his own titled something like “Dutch Blues”!  The “Rock ‘n’ Roll and Blues Heritage Museum” reflects the eclectic tastes of its founder.  While there are a few donated items (e.g., a teacher’s desk from the Tupelo Middle School attended by Elvis Presley), most of the artifacts were acquired by the owner, beginning in the Netherlands when he was a young man.

The Dutch collector was big on record albums (and the records themselves), posters, guitars signed by Blues players, some photos and prints (including several by John Lennon of Yoko Ono that were only sold as prints–and in very limited quantities–in Holland).  The collection is organized chronologically by decade, starting after World War II and continuing into the late 20th century.  We spent perhaps an hour and a half in the museum and in the “gift shop,” which had so many interesting records, cds, and dvds that it reminded me of a scaled-down, Blues-only version of Wuxtry Records over near Emory University in Atlanta, where both of our boys loved to spend time.  I actually bought a cd by local Bluesman “Pat” Thomas, whom the WB and I had met yesterday at the Old Highway 61 Museum in Leland, as well as a dvd about a film crew traveling through Mississippi in search of the Blues. 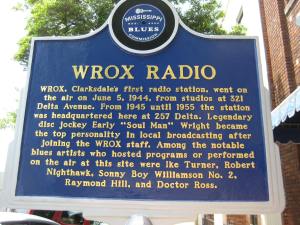 We ate in Clarksdale at the Ground Zero Blues Club, which is across the street from the Delta Blues Museum and co-owned by Hollywood’s Morgan Freeman, a native of the Magnolia State.  The food was OK, but it was really the funky, bluesy atmosphere of the place that made it memorable.  Oh, and the custom of visitors inscribing messages on every vertical surface in the club!

From Clarksdale, we drove thirteen miles up Highway 61, then took Route 49 West across the Mississippi River to another Delta Blues mecca, Helena, Arkansas.  Our destination was the Delta Cultural Center, on Cherry Street, just opposite the town’s levee.  At present, the Center has two museums across from each other.

One, in an old train depot, is mostly about the River and its impact on Delta life–and vice versa; the other has space for a traveling exhibit (this time, on Lincoln and slavery), and the music of the Delta, mostly Blues but with some attention to Gospel.  In that section of the Center also is the “broadcast studio” where an elderly disk jockey still conducts daily versions of the “King Biscuit Show,” the original of which made Rice Miller, AKA Sunny Boy Williamson II, a radio Blues icon; the modern version, however, is streamed over the Internet.  This particular museum “complex” wasn’t too impressive, but it would have been a shame to have been so close and not stopped to see it.  Plus, I think the Willowy Bride wanted to be able to say she had crossed the Mississippi River on this trip, so Helena certainly filled that bill.

After checking out of our motel, we found a Blues Trail marker honoring Son House, at the Clack Road site formerly occupied by a train station.  Next, we drove 10 miles south to Tunica, where we walked for perhaps an hour.  Tunica has gussied up about a three-block stretch of downtown so that at least some of the stores and restaurants might have a chance to draw tourists.  Central to the area is a little park, separated by a fairly new U.S. Post Office into two parts:  one section is mainly grass with some trees; the other includes an “American Veterans Memorial” and another patch of grass and trees girded by a quarter mile macadam walking track.  All in all, a pleasant venue with a real “small town” feel.

We then drove back the way we’d come–and on Old Highway 61, a two-lane road with four-way stops about every mile–not the more modern Highway 61 with its four lanes, grassy median, and a 65 mph speed limit, at least until the road reaches each town, when the speed limit drops to 45 mph.

We stopped at the Tunica Museum for what we thought would be a quick visit, but we ended up staying for over an hour, I guess.  This was another nice museum–clearly arranged around a variety of topics, interactive in places, and surprisingly successful in its efforts to be more inclusive, especially regarding the contributions of African Americans.  Two exhibits caught my attention:

1)  On the Blues (surprise!)–set in the reconstructed corner of a “juke joint.”  The audio portion featured an interview with Sam Carr, son of Bluesman Robert Nighthawk and a Bluesman himself, in an endless loop, but with each repetition bracketed by different Blues songs.

2)  On integrating Tunica’s schools–a video presentation wherein a series of talking heads, Tunica residents–black and white–offered their perspectives on the Civil Rights Movement and the struggle for school integration in the city.  Once again, a nicely balanced treatment of a prickly subject.

We ended up in the Tunica casino resorts area, where we spent the night.  (No, we didn’t plan to try our luck at slots or poker, so we avoided the, um, “resorts.”)  Seems that, after constructing 6-8 casino/resort complexes, the powers-that-be decided to invest some of their earnings in a project that was not about gambling.  This was the Tunica River Park  Museum, which, according to the brochure, included a nature walk in the wetlands bordering the Mississippi River; the aforementioned Museum; and a river boat, the “Tunica River Queen,” which offered ninety-minute rides on the river to interested visitors. Ironically, there has been so much rain this year that the river was high, so the nature walk was temporarily unavailable.

The museum was pretty interesting, though.  I especially enjoyed the aquarium; a series of panels on the history of the Mound Bayou settlement that we had driven through the other day (which helped explain why the town itself seemed barren of historical sites); a video on the Delta and the Blues; and several panels and a video on the Great Mississippi River Flood of 1927.

Towards the end of the tour, there was a video on the coming of the casinos and their impact on the economy of Tunica County.  Yes, the narrative seemed to be a joint production of the local Chamber of Commerce and the corporations that owned the casinos, but there seems to be no question that the casinos have brought jobs and money to the county (26% unemployment before 1991, less than 4% when the video was made, for example). 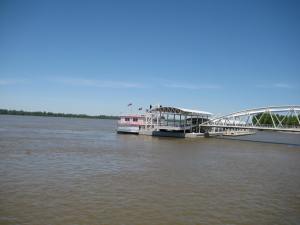 The Willowy Bride had mentioned wanting to ride the riverboat, but by the time we’d finished our visit to the museum, we were both ready to eat and decided to pass on the River Queen.  We drove back to Tunica once more, to have dinner at the locally famous “Blue ‘n’ White,” which serves southern comfort food in a former Pure gas station.  Great barbecue, funky, down home atmosphere, reasonable prices. 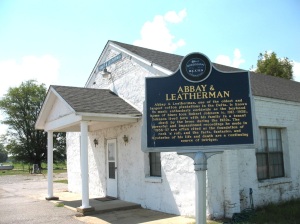 One Blues Trail marker on today’s itinerary underlines another irony in the history of Tunica County.  Posted in the heart of casino-resort territory, according to the Mississippi Blues Trail map this sign marks the site of the Abbay and Leatherman Plantation, where Blues legend Robert Johnson grew up.  That’s right:  the former plantation area of Tunica County, where any number of famous Blues performers, including the legendary Mr. Johnson, grew up, worked on cotton plantations, and performed, today is busy raising another, more lucrative crop–gambling palaces–and “picking” tourists instead of cotton!

I retired in 2010 after nearly four decades of teaching History at the "prep school" level with a PhD. My new "job" was to finish the book manuscript I'd been working on, in summers only, since 1996. As things turned out, not only did I complete that book, but I also put together a collection of my essays--published and unpublished--on Georgia history. Both volumes were published in the summer of 2015. I continue to work on other writing projects, including a collection of essays on the Blues and, of course, my blog.
View all posts by georgelamplugh →
This entry was posted in "Charley Patton", Age of Jim Crow, Alan Lomax, B.B. King, Big Bill Broonzy, David "Honeyboy" Edwards, Delta Blues, History, History of Rock and Roll, Howlin' Wolf, Interdisciplinary Work, John Lee Hooker, Leadbelly, Mississippi John Hurt, Muddy Waters, Popular Culture, Research, Retirement, Robert Johnson, Son House, Southern History, The Blues, Uncategorized, WP Long Read and tagged Delta Blues Museum (Clarksdale, Ground Zero Blues Club, Helena Arkansas, Henry Townsend, Mound Bayou Mississippi, Ms.), Muddy Waters, Robert Johnson, Rock 'n' Roll and Blues Heritage Museum (Clarksdale, Son House, Sonny Boy Williamson II, Tunica (Mississippi) Museum. Bookmark the permalink.