Posted on July 1, 2013 by georgelamplugh

Muddy Waters (April 14, 1915-April 30, 1983) was born McKinley A. Morganfield in Rolling Fork, Mississippi. His family moved farther north, to the Stovall Plantation near Clarksdale, when he was about three, and it was there that he eventually taught himself to play both the harmonica and guitar.

By the early 1940s, young Morganfield was a tractor driver during the day and performed at night as “Muddy Waters, Stovall’s Famous Guitar Picker” in neighboring juke joints. He was “discovered” by a traveling folklorist, Alan Lomax, who, along with John Work from Nashville’s Fisk University, recorded him at Stovall in the summers of 1941 and 1942. As Muddy described the experience, “[W]hen Mr. Lomax played me the record [of his 1941-42 songs] I thought, man, this boy can sing the blues.” Indeed he could. Encouraged by Lomax’s enthusiasm, Muddy left for Chicago in 1943.

The beginning of a fine DVD, “Muddy Waters: Can’t Be Satisfied,” is evocative of the place and time he grew up. Listen for the strains of one of the first songs Lomax recorded, “I Be’s Troubled.” Imagine Muddy showing up after work, barefooted, and sitting down to play the piece on a guitar borrowed from Lomax. We’ll return to this tune, later called “Can’t Be Satisfied,” as we chart Muddy’s growth as a performer.

Muddy and His First Record

Muddy Waters had made his name in Clarksdale as a singer of the “Delta Blues,” either as an acoustic guitar soloist or as a member of a quartet. His new home, the South Side of Chicago, was known as that city’s “Black Belt” because of its preponderance of African-American population by the 1940s. In fact, former sharecroppers, as well as the occasional restless musician like Muddy, had been leaving the South for the “Promised Land” of Chicago in increasing numbers ever since World War I, a movement usually referred to as the “Great Migration.” Thus, there was a ready-made audience for the Blues in Chicago, once performers used to the (relatively quiet) frenzy of rural juke joints learned how to reach the crowds in the city’s raucous downtown music clubs.

As he worked house parties and clubs on Chicago’s South Side, Muddy realized that he needed more volume to cut through the noise generated by large, enthusiastic audiences. He purchased his first electric guitar in 1944 and began to experiment with its sound. Using a thumb pick and a bottleneck slide with this guitar was a first step to increasing the volume of his performances, even as he built a band around a second electric guitar, an amplified harmonica, a bass, drums, and a piano.

More than any other performer, Muddy Waters was responsible for introducing the “electric Blues,” which in turn exerted a major influence on rock ‘n’ roll. (Yet, as writer Amin Sharif points out, “Much has been made about Muddy playing an amplified guitar and using amplified instruments in his band. But none of this would have made a difference if Muddy hadn’t been one hell of a musician.”)

“One Hell of a Musician”

Nevertheless, Muddy’s bosses at Chess Records, where he began to record in 1948, insisted at first that he forget about electrifying his guitar and try instead to achieve a spare “Mississippi sound,” so they paired him only with bass player Ernest “Big” Crawford on his earliest recordings. Muddy and Big’s first song for Chess was the same tune Alan Lomax had recorded at Stovall as “I Be’s Troubled,” but it was now called “Can’t Be Satisfied.”

In 1950, Muddy Waters and Big Crawford recorded a song that still “echoes down through rock ‘n’ roll history,” according to writer Tim Cahill. This was “Rollin’ Stone,” which was re-done in classic fashion by Bob Dylan, used as the name of an English rock band, and adopted as the title for the first magazine to take rock music seriously as part of popular culture. By the mid-‘50s, an insistent Muddy Waters had convinced Chess Records to allow him to record with his full band (guitars, harmonica, piano, drums, and bass), as you can hear, for instance, in his 1956 rendition of “Got My Mojo Workin’.”

Between 1951 and 1956, Muddy put fourteen songs on the national charts, and by the latter date his songwriting had lost most of the traces of his Mississippi roots and become “almost wholly urban in character.” (“Bio Chronology”) During this same period, a new musical sound, rock ‘n’ roll, had begun to cut into the popularity of the Blues. Ironically, Muddy himself aided this development, for in 1955, when young Chuck Berry arrived in Chicago, Muddy advised him to record at Chess. Berry recorded “Maybellene,” and the rest, as they say, is rock ‘n’ roll history.

The explosive growth of the popularity of rock ‘n’ roll cost Blues performers audiences and record sales. As national tours grew scarce for Muddy and his band, he found other outlets abroad. In 1958 and again in the ‘60s, he toured Great Britain, where his flaming electric Blues won him many new fans, including some who went on to form groups that would be at the forefront of rock’s “British Invasion” of the U.S. in the 1960s, including the Rolling Stones, the Yardbirds, and the Animals.

The early ‘60s saw the beginning of an interest in folk music among affluent young whites, and numerous festivals sprang up to stoke that interest. Muddy Waters performed at the Newport Jazz Festival to great acclaim in 1960, winning a new audience for himself. Chess Records attempted to capitalize on this altered perspective of one of their most successful artists, releasing a new recording, “Muddy Waters: Folk Singer” in January, 1964, and a compilation, “Muddy Waters: The Real Folk Blues,” in January, 1966. The Chess brain-trust continued to experiment with Muddy’s sound during the ‘60s, for example by backing his guitar stylings with a horn section on the album “Brass and the Blues.” 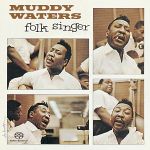 Then, in 1968, young Marshall Chess, son of one of the founders of the Chess label, decided to give Muddy the Jimi Hendrix, screaming psychedelic guitar treatment on what is surely the most controversial of Muddy’s albums, “Electric Mud.” (That title, by the way, was ironic, for Muddy Waters had been playing an electric guitar for almost a quarter of a century by 1968. In 1968, though, “electric” was “a buzz word for ‘turned-on,’ psychedelic, as in ‘electric Kool-aid.’” [Mark Humphrey, notes for cd, “Electric Mud.”]) According to Marshall Chess, the album sold between 150,000 and 200,000 copies, even though Blues purists attacked it unmercifully. (ibid.) On the other hand, a modern Rap performer, Chuck D, asserts, correctly I think, that “Muddy brought the Blues to the band, not the other way around.” (Sharif) Decide for yourself: listen, for example, to the “Electric Mud” version of a Muddy Waters’ classic, “Mannish Boy.”

So, listening to Muddy’s recorded output during the 1960s, fans might be forgiven for wondering exactly what sort of singer he was—a Blues singer, a folk singer, a fugitive from Herb Alpert and the Tijuana Brass, an older clone of Jimi Hendrix? But, as writer Tim Schuller points out, “If fans who wanted the real Muddy Waters couldn’t find him on wax—they’d find him on the road.” (Schuller, notes on cd, “Muddy Waters: The Lost Tapes.”) Check out, for instance, two cuts from live concert recordings: “Long Distance Call,” (1969) from one of my favorite Muddy Waters’ albums, “Fathers and Sons”; and “Hoochie Coochie Man” (1971), from “Muddy Waters: The Lost Tapes.”

Muddy finally severed his long relationship with Chess Records in 1975, for what looked like retirement, but fate intervened, in the form of blues/rock star Johnny Winter. Winter brought together Muddy and a band in 1976 to produce his “comeback album,” “Hard Again,” which won a Grammy Award in 1977. The band members, who worked with Muddy on the last four albums he made, all for Columbia’s Blue Sky label and with Winter as producer, were a veritable “super group.” They included: James Cotton and Jerry Portnoy on harmonica; Calvin Jones on bass; “Pine Top” Perkins on piano; Willie “Big Eye” Smith on drums; and Luther “Guitar Jr.” Johnson, Bob Margolin, and Johnny Winter himself on guitars.

The success of “Hard Again” gave Muddy the opportunity to open for Eric Clapton, jam with the Rolling Stones, record three more albums, and win two more Grammys. From “Hard Again,” listen once more to “I Can’t Be Satisfied,” noting especially the strength and confidence in Muddy’s voice, seasoned by constant use over the past four decades, and the interplay among the musicians. It’s a wonderful recording!

Also in 1976, Muddy settled a lawsuit with his publishers, Arc Music, the proceeds from which enabled him to live in financial comfort for the rest of his life. He died in his sleep on April 30, 1983, in his home in the Chicago suburb of Westmont.

A comprehensive, if a tad overwritten, assessment of Muddy’s career comes from Blues critic Pete Welding, who called him “one of the greatest, most influential and enduringly important musicians of the century, one who had reshaped the course of the blues, set it on a new path, and, through the influence he exerted on so many others who followed in his trailblazing wake, completely altered the sound, substance, and very character of all popular music.” (Quoted in Humphrey, “Muddy Waters: His Best, 1956 to 1964.”)

I retired in 2010 after nearly four decades of teaching History at the "prep school" level with a PhD. My new "job" was to finish the book manuscript I'd been working on, in summers only, since 1996. As things turned out, not only did I complete that book, but I also put together a collection of my essays--published and unpublished--on Georgia history. Both volumes were published in the summer of 2015. I continue to work on other writing projects, including a collection of essays on the Blues and, of course, my blog.
View all posts by georgelamplugh →
This entry was posted in Alan Lomax, Chicago Blues, Delta Blues, Muddy Waters, The Blues, Uncategorized and tagged Blues, Chicago Blues, Delta Blues, Muddy Waters. Bookmark the permalink.