Posted on October 2, 2011 by georgelamplugh

“Blues ain’t never going anywhere.  It can get slow, but it ain’t going nowhere.  You play a lowdown dirty shame slow and lonesome, my mama dead, my papa across the sea I ain’t dead but I’m just supposed to be blues.  You can take the same blues, make it up-tempo, a shuffle blues, that’s what rock ‘n’ roll did with it.  So blues ain’t going nowhere.  Ain’t goin’ nowhere.”  (David “Honeyboy” Edwards, 2008)

David “Honeyboy” Edwards, the last of the Delta bluesmen, died on August 29 in Chicago, at the age of 96.  Among my cd collection are a couple of shelves of blues compilations, which group songs by early blues performers topically, geographically, chronologically, etc.  In all of the songs on those compilations, I found exactly two (count ’em, two) tracks by Edwards.  So, obviously I own almost nothing from his blues repertoire, yet I knew who he was as soon as I saw the headline on the obituary in the local paper.

Checking amazon.com, I discovered that there are perhaps eight audio cds with selections by Mr. Edwards available for purchase, and a couple of those are dated 2011, which suggests (call me a blues cynic) that they have been re-released to take advantage of any late-blooming interest in the deceased guitarist’s career.  Amazon.com also lists an autobiography, The World Don’t Owe Me Nothing:  The Life and Times of Delta Bluesman Honeyboy Edwards (1997), which one source describes as a rare,  detailed account of the life of an itinerant Delta bluesman, but I have not yet read it. So, I wondered, how did I know the name David “Honeyboy” Edwards?

I checked my 1996 edition of the All Music Guide to the Blues and discovered that reviewer Bill Dahl thinks that the once underappreciated Edwards had recently begun to receive the credit he deserved, because “his slashing, Delta-drenched guitar and gruff vocals are as authentic as it gets.” (80)  A second reviewer, Ron Wynn, notes that “Edwards does not rely on slickness, inventiveness, or niceties; his riffs, lines, phrases, and licks are as aggressive and fiery as his vocals.” (Ibid.)  And yet–I have only two tracks by Edwards in my collection, and they are found on compilations I seldom listen to.  So, why was his name so familiar?

Eventually, I realized that it was my own training as a Southern historian that brought me into contact with David “Honeyboy” Edwards, but by a roundabout route.  Nearly a quarter of a century ago, when my older son and I rode to school together, we quickly realized we would have to come to an understanding about what music to listen to en route, because our tastes were very different.  After a few days of trial and error, we discovered a local public radio station that played the blues from 6-10 a.m. every weekday.  Once we found this station, we both were hooked on the blues, at least for the duration of my son’s high school career.  Once he graduated and moved on to college, I taught at the same school for two more decades, and, during all that time, I started off each workday listening to the blues.

It was the rootedness of the blues in American history and culture that resonated with me.  I eventually developed a unit on the origins of the blues in the Jim Crow South for my American History survey course, and in more recent years I worked up a number of one-hour “classes” on the blues and on different blues performers.  To aid in my research, I gradually amassed a bulging shelf of books on the blues, as well as a number of documentary films on vhs and dvd.

It was while using these books and videos to prepare lectures on the blues that I began to notice how frequently David “Honeyboy” Edwards cropped up as a source of information on the history of the blues.  While the reviewers in the All Music Guide to the Blues might be right about the Delta-esque quality of his guitar-playing abilities and the “fiery” quality of his voice, David “Honeyboy” Edwards, for me at least, is much more significant for what he told us about the lore of the blues and the lives of its performers than for his music.

During the revival of interest in the blues in the 1960s, a few determined researchers headed South to locate and interview surviving African-American Blues performers.  Of course, they were looking for the “big names,” men and women who had recording careers before World War II but then seemingly vanished into the vastness of the rural South, victims of changing musical tastes of fickle American audiences.  These researchers were so zealous to fill in gaps in blues history, however, that they were ready to talk to anyone in the Deep South willing to speak on the subject, whether they were known beyond the Delta or not.  Among the many sources these interviewers encountered, no one looms larger in retrospect than David “Honeyboy” Edwards.

For example, David Edwards provided clues that helped researchers finally to illuminate the painful last days of the legendary Delta bluesman Robert Johnson, poisoned in 1938 by the husband of a woman he fancied, in Three Forks, a Mississippi crossroads community.  Edwards’s story about Johnson’s death is the most frequently cited of his contributions to blues history, but there were numerous others.  His nearly eighty years as a professional bluesman took Edwards from the Mississippi Delta to Memphis, then to Chicago and beyond, yet his most memorable contributions often came, not when he sang, but when he told researchers–and concert audiences–what he knew, had seen, or had heard about the early decades of the blues and those who made them.

And Edwards seems to have been everywhere during the 1930s and 1940s, when the blues, like its performers, after flourishing in the Delta, fled the Jim Crow South and headed for the sprawling, industrial cities of the Midwest, especially Chicago.  And since, unlike a number of his contemporaries among the emigre blues performers, David Edwards both continued to perform (though he was not recorded very often) and was willing to tell what he knew about the formative years of the blues, he became a primary source for blues historians.  Mr. Edwards’s stories about the lives and times of Robert Johnson, Charley Patton, Muddy Waters, Big Joe Williams, Little Walter, Howlin’ Wolf, and other early blues performers found their way into magazine articles, books, television performances, and documentary films.  His engaging, cheerful, and perceptive reminiscences gradually elevated Edwards to blues legend status himself, as he came to be regarded, in the words of an obituary headline,  as the “last link to [the blues] genre’s greats.” 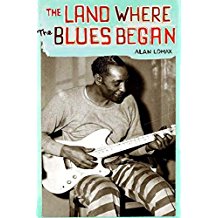 Even with all this information about the sunset years of Mr. Edwards, I couldn’t help wondering what he was like as a young bluesman.  To help answer that question, I turned to Alan Lomax’s The Land Where the Blues Began (1993).  When Lomax ventured South in 1942 as part of a mixed-race team hoping to record “folk musicians” in the Delta, one of the first places he visited was Clarksdale, Mississippi.  There he encountered a young African American musician who had been “selected” for the military draft but was looking for a way to avoid that obligation.

Lomax learned that his new acquaintance already had made a few commercial recordings and, because of that, did not want to be identified by his real name; so the young man asked the visiting scholar to refer to him by an alias if he mentioned him in any published research.  Fifty years later, in The Land Where the Blues Began, Alan Lomax revealed that this musician was David “Honeyboy” Edwards.

Lomax’s account of his relationship with Edwards in 1942 casts a fascinating light on the personality of the then twenty-seven year-old  bluesman.  “Young Dave,” as Lomax called him, was talented, cocky, seemingly fearless, and he reveled in the magnetism of his bluesman’s persona to the opposite sex.  The young Edwards knew he had talent, and he planned to capitalize on his gifts somewhere beyond the constraints of the Jim Crow system–but not just yet.  As he told Lomax,  “I just loves to ramble.  If it wasn’t for this army draft business holding me down, I’d be gone now.  They ain’t nothing doing around here.” (395)   (In 1942, Edwards identified for Lomax a number of local musicians he should record, but, the Lomax of 1993 reported with embarrassment, he neglected to follow up any of Edwards’s leads, and, forty years later, all those named were dead.)

Honeyboy bragged to Lomax that musicians liked two things, “whiskey and women.  And the womens [sic] like us [blues players] better than they do the average working man.” (397)  Edwards boasted that he had a lot of girlfriends, along with “four or five children scattered here and about other country places.” (397)  He also claimed that his mother used to accompany his musician father to dances and juke joints until “she got converted and joined the church and got him to quit playing the blues.” (398)  Young Edwards even cheerfully agreed that the blues were the “devil’s business”:  “Well, I believe the blues is.  And I’m the devil’s child right now.  I guess it’s been seven or eight years since I been to church.  If I’m not a church man, I just won’t be a hypocrite.” (399)

And David “Honeyboy” Edwards was no hypocrite.  He played and sang the blues; he eagerly shared, with anyone who asked, the stories he had collected over a long lifetime; he spoke the truth as he saw it; and he did so with grace.  With his death, as the song “Six Strings Down” has it, there’s been “another blues stringer called home.”  I have a feeling there’ll be “good times tonight” in “Blues Guitar Heaven,” once Honeyboy sings (or talks) his way through those pearly gates.

I retired in 2010 after nearly four decades of teaching History at the "prep school" level with a PhD. My new "job" was to finish the book manuscript I'd been working on, in summers only, since 1996. As things turned out, not only did I complete that book, but I also put together a collection of my essays--published and unpublished--on Georgia history. Both volumes were published in the summer of 2015. I continue to work on other writing projects, including a collection of essays on the Blues and, of course, my blog.
View all posts by georgelamplugh →
This entry was posted in Alan Lomax, Current Events, David "Honeyboy" Edwards, History, Southern History, The Blues. Bookmark the permalink.